A Cultural Journey from Karnprayag to Bageshwar

The route between Karnprayag to Bageshwar has unique natural and cultural landscapes. It comprises two distinct cultural realms, two river valleys, two Sangams, and two natural regions – Badhan in the Garhwal Himalaya and Katyur in the Kumaon Himalaya.

Karnprayag to Bageshwar is one of the important cultural realms of both Garhwal and Kumaon Himalayas. The journey for this natural-cultural realm begins from Karnprayag (773 m), 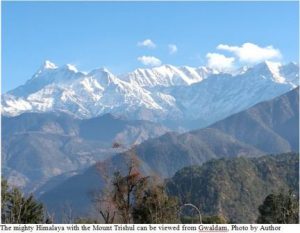 a town situated on the confluence of two rivers – the Alaknanda River draining from north to southwest and the Pindar River draining from east to west. Karnprayag town has both historical and cultural importance. The term ‘Karnprayag’ is derived from ‘Karna’, the eldest son of Kunti(the queen of the Pandava Dynasty). It is believed that Karna performed penance at Karnprayag on the rock situated in the Sangam. The place Karna Kunda is still visualised at the same place. Karnprayag is also famous because of its location on the midway to Badrinath Dham (pilgrimage). Pilgrims and tourists visit Karnprayag while on their way to Badrinath.

On the first of January 2016, I started a journey from Karnprayag to Bageshwar. Early in the morning, I proceeded to Narayan Bagar, a small service centre, which lies on the bank of the Pindar River. About 7 km from Karnprayag, the village Simli lies on the left bank of the Pindar River, from where a road bifurcates to Gairsain, the summer capital of Uttarakhand. Another road goes to Gwaldom along the course of the Pindar River. A few villages lie on the way to Narayan Bagar such as Nauli, Banoli and Nalgaon. Narayan Bagar (1100 m) is known for the famous temples of Lord Vishnu (Devalaya) and Lord Shiva (Shivalaya). In Uttarakhand, the adorable deity is Lord Shiva and Goddess Shakti, and therefore the Shivalayas are outnumbered. I stayed at Narayan Bagar for a night and visited both the temples of Lord Vishnu and Shiva. The journey goes upto Tharali (a service centre) along the Pindar River through several settlements on the way such as Panti, Meing Gadhera, Harmany, Kulsari and Sunao. The entire Pindar Valley from Karnprayag to Tharali has panoramic land features. The terraced agricultural fields on both sides of the Pindar Valley enhance its beauty. However, the landscape is very fragile, and therefore roadblocks are common.

A road bifurcates from Tharali. One goes to Deval, about 20 km from Tharali along the Pindar River, which is a base camp for trekking to Bedni Bugyal (alpine pastureland) and Roopkund (a highland mysterious lake).

The other road goes to Gwaldam through Lolti, Thal, and Tal settlements almost about 20 km. The landscape is sloppy and the road traverses upwards. Lolti, famous for apple and citrus fruits, has a panoramic landscape. The large terraced fields facing the Himalayan ranges enhance its beauty. After Lolti, dense mixed oak and coniferous forests are found up to Gwaldom, make a beautiful forest landscape. Snow falls covers the entire route during the four months of winter. The two settlements – Thal and Tal—are situated in the dense temperate forests. From Tal, a route goes to Binatoli, a campsite for paramilitary forces (SSB). From which, about 3 km trek goes to Badhan Garhi through a steep slope. Badhan Garhi (2700 m) is an abode of Goddess Maha Kali. The Bhairav Baba temple lies a few metres upslope. It is a very difficult trek, however, the temple and its surrounding areasare spectacular. A long-range of the Himalaya can be viewed from the temple. I spend a total of 4 hours to trek Badhan Garhi from Tal. I reached Gwaldom at 8 pm. Gwaldam (1950 m) and its surrounding areas were covered by full of snow. The temperature was minus 0o. I saw a few tourists. There are substantial tourist lodges, hotels, and a forest bungalow therefore I got accommodation easily.

Gwaldam,known as the sleepy town of Garhwal, is situated in a serene environment surrounded by lush green coniferous forests. One of the Himalayan peaks Trishul can be visualised closely from Gwaldam. It is situated on a 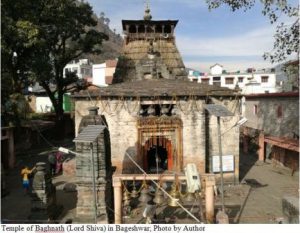 ridge dividing the watershed of the Pindar River in the west and the Gomati River in the east. It has a mixed culture of Garhwal and Kumaon because of its transitional location between these two natural and cultural realms. The food and beverages are nutritious and tasty. I god up early in the morning and went for a morning walk towards Tal. It was a little dark.While on the way, I saw the sun rays falling on the Trishul peak, and then the entire Himalayan peaks looked golden. It was a heartfelt view. Trishul is a trident shaped mountain peak, related to Lord Shiva. Therefore, the Himalaya symbolizes Lord Shiva and his abode. North facing slopes in the Himalaya are very cold during the winter because they do not receive enough sunshine. The area between Gwaldom and Tal is north facing therefore, it was very cold. The severe cold winds were blowing, seemed that the Himalaya itself entering into Gwaldam. I had to proceed for Bageshwar; therefore, I got up ready. About 20 km from Gwaldam, a small historical and cultural town, ‘Baijnath’ (1100 m) is situated on the bank of the holy Gomati River. It is known for a group of 18 temples of Lord Shiva, Goddess Parvati, and other folk deities.A road bifurcates from Baijnath – one goes to Kosani about 10 km and the other goes to Bageshwar about 20 km. The Gomati River valley between Baijnath and Bageshwar is called ‘Katyur Valley’, which is a fluvial landscape.

Bageshwar (870 m), a cultural town, and a district headquarters is situated on the confluence of the two holy rivers – the Gomati and the Saryu. The town is known for its spectacular landscape.

A Baghnath (Lord Shiva) temple lies close to the Sangam of the two rivers where a 20-day-long Magh Mela is celebrated in the month of Magh during winter. Pilgrims visit Bageshwar and celebrate the festival. Bageshwar is also known for the Sage Markandey, who believed to be penance here. According to a myth, the Bhagirathi River flew here, formed Triveni, which has now disappeared. Bageshwar is the base camp for trekking to the Pindari glacier, the source of the Pindar River. It has a few quality hotels where pilgrims and tourists stay. Food and beverages are nutritious and plenty. I stayed overnight at Bageshwar and the next day came back.

This route between Karnprayag to Bageshwar has unique natural and cultural landscapes. It comprises two distinct cultural realms, two river valleys, two Sangams, and two natural regions – Badhan in the Garhwal Himalaya and Katyur in the Kumaon Himalaya. Taking a holy dip and meditating both in Karnprayag and Bageshwar is a lifetime achievement for the pilgrims. Baishakhi festival is celebrated in the month of Baishakh (April) every year in the entire Pindar Valley. Except for the four months of monsoon season, the whole year is suitable, whereas winter is the most suitable, needs about a complete week to cover the route.

(Slider Image by author: the Pindar River joining the Alaknanda River at Karnprayag)