The fact that gynaecological cancers have been included within the ambit of PM’s ambitious Ayushman Bharat scheme highlighted the Government’s concerns towards cancers in women, a panel recently suggested.

In a random trial performed in India, 1,31,000 women in 52 villages aged 30-50 were normally assigned to a single screen using either the Human Papillmoavirus (HPV) test or cytology or visual inspection of the cervix. The data showed after an eight-year follow up that the risk of dying from cervical cancer was less in women who were invited to screening with HPV test or cytology testing.

Relying on a data published in Australia, Prof. Ian Jacobs, Vice Chancellor University of New South Wales, Sydney recently stated that given all of this, it is possible to eliminate cervical cancer.

In Australia, where the screening started many years ago and vaccination was only introduced in 2008, the data states that by 2020, the incidence of cervical cancer in Australia will be less than six per 1,00,000, and by 2030, it would reduce to four per 1,00,000 per year. But the problem that prevails is that the screening and vaccination is available only in countries were incidence of this disease is incredibly low.

Adopting a historical perspective, he spoke about how George Papanikolauo was the first person to observe that the cells of reproductive tract of women with cervical cancer are different from those women who don’t have cancer when seen under a microscope – Bigger the nucleus of the cell, more severe the abnormality which led to cervical cytology.

Ovarian Cancer unlike cervical cancer is not caused by an infectious agent. It is related to reproductive factors and has a higher rate in women with low number of pregnancies. It is prevented by use of the contraceptive pill. Ovarian cancer screening is done to pick up early cancer and not pre-cancer as in cervical cancer. Unlike the cervical cancer, we don’t have a 15-year window and also the ovaries are not easily accessible as cervix. In 1930s, 40s and 50s, people started staging surgery to detect ovarian cancer.

“Since the process takes 15 years to reach severity from normality, it thus allows ample time for well organised screening programme to detect abnormality.” 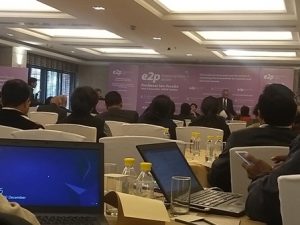 Eventually, this led to pap screening in well-resourced countries like Australia, North America and the UK in 1950s. It also led to colposcopy. All of this led to an understanding of the natural history of cervical cancer. In search of an answer to why women had cervical cancer, in 1970s, it was observed that cervical cancer had an infectious male factor. Krithiga Shridhar, Research Scientist, Public Health Foundation of India, emphasised on the cardio-vascular differences between men and women which eventually led women to be more vulnerable to cancer.

In 1984, HPV was identified by Harald zur Hausen to be the cause of cervical cancer. This led to organised screening and subsequently an effective vaccine, all of which makes prevention of cervical cancer possible. In fact, in 1984, imaging technology and ultrasound was used to measure the size of ovaries and shape of ovaries in post-menopausal women. This was a huge achievement and opened doors for screening of a disease in which five-year survival rate was less than 25 per cent. The problem that arose was that in long run was that it did not have 100 per cent sensitivity.

“It was discovered very quickly that there is a strong correlation between the stage of diagnosis and chances of survival. In a data, he revealed that most women had stage 3 where it becomes hard to treat considering ovarian cancer has four stages.”

He further talked about the “risk of ovarian cancer algorithm” (ROCA) which is used by United Kingdom Collaborative Trial of Ovarian Cancer Screening (UKCTOCS). The algorithm incorporates a woman’s age, her serum CA125 value (and changes in this value over time), and a pelvic ultrasound in selected women deemed to be high risk. Considering the sensitivity of ROCA is 86 per cent, by the algorithm, it is possible to pick up cancer on an average of two years before the woman knows she has cancer or any symptoms of the same.

The fact that gynaecological cancers have been included within the ambit of PM’s ambitious Ayushman Bharat scheme highlighted the Government’s concerns towards cancers in women, a panel chaired by Dr. Preetha Rajaraman, Health Attaché and Regional representative, South Asia, US Embassy, New Delhi suggested.

The panel also brought to light the fact that National Institute Cancer Prevention and Research (NICPR) provides a blended training to medical professionals with respect to cancer screening and vaccination.

Highlighting the need of comprehensive primary healthcare and insurance scheme, Sanjay Gupta, Scientist, National Institute of Cancer Prevention and Research brought to light the shortcomings in the Government’s approach. The panel also drew special attention to emotional support to the patients by the community.

The writers are law students at Hidayatullah National Law University, Raipur. They can be reached on twitter @DelhiPostNews and @TanviJa52956900 respectively.