As first responders, the health sector needs robust infrastructure as well as needs to become adept to tackle the greater burden of diseases resulting from the aftermath of floods, droughts , heatwaves, air pollution, vector-borne transmission and post-traumatic disorders besides malnutrition. 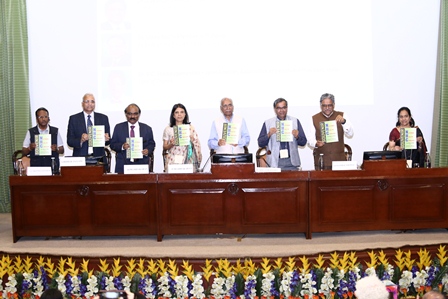 As the greatest public health challenge of the 21st century, climate change threatens to undo and outdo health sector gains of the past years. Strengthening health infrastructure and preparing communities for the emerging health threats from expanding geographies of vector-borne diseases like dengue and malaria, threatened food and nutrition security, health hazards arising due to air pollution, extreme and unanticipated events such as floods, cyclones, heat waves, cold waves and salt water intrusion (due to rising sea levels) needs to become the focus in order to build climate resilient hospitals and communities.

Dedicated to the health impacts of climate change in India and appropriate risk mitigation and adaptation strategies, a one-day ‘National Health Conclave on Climate Change and Health – Role of the Health Sector’ was organised by the Association of Healthcare Providers of India (AHPI) and the Centre for Environmental Health (CEH) with the Public Health Foundation of India (PHFI).

In her welcome address, Dr. Poornima Prabhakaran, Deputy Director, CEH, PHFI said that the “health sector needs to respond to the call of youth who deem Climate Change as the Millennial Cancer”.

She stressed on the “significance of an all-encompassing strategy that addresses health through the sustainable development agenda that can go a long way in setting the trajectory for impactful changes to address health impacts of climate change”.

The conclave brought together stakeholders including government, research institutions, academia, industry, community and international agencies on one platform to “find a lasting solution”.

WHO Chief Scientist Dr. Soumya Swaminathan stated that there is an increasing need to strengthen health systems to be “climate resilient” and “climate adaptable” to mitigate the impacts of climate change.

“We have seen in India and other parts of the world the devastating impacts of climate change on people’s health but also the damaging impacts of institutions which are providing healthcare like primary healthcare centers and hospitals,” said Dr. Swaminathan.

She also emphasised on the need to design healthcare facilities to be climate adaptable like using renewable energy sources than fossil fuels. “Electricity and running water is absolutely essential in providing quality services to people accessing healthcare facilities. We need to adopt the use renewable energy sources in our health systems. Other areas of focus are the use of plastics and cost effective, environmentally-friendly and effective disposal of plastic in our health systems,” she pointed out.

The conclave featured talks and panel discussions on the theme. Meanwhile, a white paper on the theme is scheduled to be released next week. With the primary objective of summarising the available evidence on inter-linkages between climate change, air pollution and associated health impacts, the white paper focuses on the critical role of health sector as a contributor as well as a first responder to climate change.

“Endorsed by key representatives of the health sector, the white paper also discusses the potential mitigation and adaptation strategies applicable to Indian health sector with implementable actions and policy focus.”

“As ‘first responders’, the health sector capacity needs to be strengthened both in the form of robust infrastructure as well as needs to deal with greater burden of diseases resulting from the aftermath of floods, droughts, heatwaves, air pollution, vector-borne transmission and post-traumatic disorders besides malnutrition, resulting from affected agricultural production impacting nutritional security and diversity,” Dr. Prabhakaran told Delhi Post.

She also underlined the critical need for an inter-sectoral approach that is imperative in setting the trajectory for impactful changes to address such health impacts of climate change.

Professor K Srinath Reddy President, PHFI said that it is well demonstrated that the rise in temperature increases the growth of inter-group and intra- group conflicts.

“Our nutrition and food systems are vulnerable to climate change, in terms of both reduced production and quality of staples, non-staples, fruits and vegetables. In spite of mounting evidence of the impact of climate change and health, there is a wavering political will in some countries and the voices of climate denial are growing shrill and strident. This needs to be countered by the health sector acting as the conscience keeper of society through evidence based advocacy highlighting the mounting damage to health and wellbeing,” he opined.

He also spoke about the role of leadership in the health sector and said that it is not only limited to public education but also extends to becoming “a role model for other sectors”.

“There is a substantial contribution that the health sector can make by adopting green technologies to reduce various greenhouse gas emissions and decreasing energy consumption by adopting renewable energies. This can contribute to mitigation of climate change in a very measurable way,” he shared.

The conclave concluded with the ‘Let Us Live’ concert featuring Grammy award-winning composer, music producer and environmentalist, Ricky Kej who along with various international artistes presented a medley of musical genres advocating for the environment.

Prevent degradation of ocean and its ecosystem: Vice President of India