Shutting down of schools during the pandemic has increased the rate of girl child drop outs and the incidences of child labour, marriage, trafficking and domestic violence.

As the world is adjusting with the changing times, technology has become a new necessity. However, technology is a luxury not everyone can afford in India. Although the government is 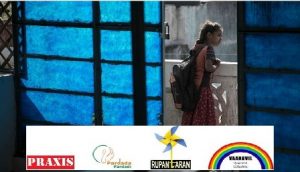 putting its effort to ensure the stability of livelihoods of the marginalised by bringing new schemes, education remains the one sector, which requires a complete makeover. Classrooms were taken over by computers or smart phones, and availability of internet became more crucial than the availability of books. Such a humongous change added to the already prevailing challenges of girl child education in the country, and among them adolescent girls have been the most affected. The lockdown not only extended an already prevailing gap between the accessibility of education for adolescent girls, it also disrupted their daily lives by affecting their mental health and wellbeing. It even increased the rate of girl child drop outs, which in turn increased the incidences of child labour, marriage, trafficking and domestic violence.

In order to understand the ground reality in a holistic way Praxis, along with Vaanavil, Rupantaran Foundation and Pardada Pardadi Educational Society (PPES), conducted a rapid assessment via telephone with 290 adolescent girls. The age group of these girls was 13 to 19, studying in Classes 7 to 12 and they belonged to the states of Uttar Pradesh, Tamil Nadu and West Bengal. Students from professional courses from various diversified communities were also interviewed. Their objective was to bring to light the status of deliverables under Public Distribution System (PDS) and the central government sponsored welfare schemes and the challenges faced while accessing relief and entitlements and the impact on education post lockdown.

There was a sense of fear and confusion for the future among all the respondents. Due to a complete disconnection from schools many students were already beginning to forget the syllabus they were taught before the lockdown. They were also worried about the syllabus that was left for that academic year and were unsure if they ‘will be able to continue their education’. The burden of household chores, lack of interest in studies and the fear of having to drop out added to the challenges. One respondent said, “I am the first generation in my house who is studying in Class VIII. School, tuitions are all closed, I have lot of problems. I do not understand what will happen.”

With the onset of online classes, 116 students out of the 290 adolescent girls who were interviewed shared that they were deprived of education as they did not have smart phones or enough money to do an internet recharge.

148 girls were not able to attend the e-classes rotationally, while the others had to back out as their brothers were given preference for the use of mobile phones.

There was also a significant increase in the physical and mental health issues among the girls. Some students were feeling depressed due to social isolation, while others were getting periodical headache as their eyes strained by continuously staring at the small mobile screen during e-classes. They also missed doing practical classes with their classmates in the school laboratory. Apart from that their nutrition and food intake also decreased due to unavailability of three meals per day as their families were not earning any income, and the free rations that some were receiving only had carbohydrates and no nutritional component. This left them feeling fatigued and impacted their immune system adversely. One respondent said, “Every Friday, when schools were on, we were been given Vitamin and Iron Tablets for free to build a healthy immune system, but due to lockdown we have not been able to access any health benefits.” Another benefit that they missed receiving from schools was access to sanitary napkins, which supported them to ensure their menstrual hygiene. After lockdown 204 adolescent girls reported that they were using old rags during menstruation either due to family’s low income or due to hesitation to ask the male relatives to buy sanitary napkins for them when they stepped out during lockdown. 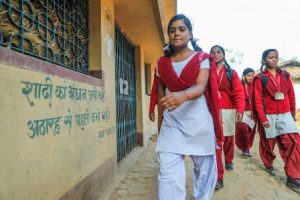 The conversation with the respondents also surfaced a looming threat on the continuity of their education. Many were worried to be pulled out of school as their parents were not in a state to afford books, stationery and school fees and hence wanted them to work in order to support the family financially. One of the respondents from Dindigul District of Tamil Nadu said, “due to the loans taken during the lockdown, my parents would want to send me for millwork after the lockdown as they do not have much income to repay the loans taken.” Another respondent from West Bengal shared that there had been an increase in the cases of girls whose marriages have been fixed during lockdown. The rush in which the marriages were being arranged, she suspected the girls to be in danger of trafficking in the name of marriage.

When asked about the access to various government schemes, ration was one that was poorly available to everyone, but free cylinders under Ujjwala scheme were mostly available. Under the provision of old age pension, there were only 50 per cent registrations of the eligible people and only half of the registered received pensions. Similar was the case with Kisan Samman Nidhi scheme.

As recommendations to schools the civil societies suggested enrollment of girl children in the National Scheme of Incentive to Girls for Secondary Education to avail benefits that could help with their Secondary Education and reduce the number of dropouts from classes 10 to 12.

Offering a common resource to ensure accessibility to online classes to all the students across urban and rural areas and facilitating peer learning groups was also one of the suggestions for the schools.

Representatives of Civil Society Organisations (CSOs)suggested Extension of Kanyashree Prakalpa scheme to all the classes, provision of educational loans at minimal interest, facility of door-to-door supply of sanitary napkins and iron tablets through the Government Integrated Child Development Services (ICDS) scheme, facility of telephonic counseling and support to the victims of domestic violence through ICDS and primary health centres, relaxing the enrollment in Dhanalakshmi scheme for school benefits and Sukanya Samriddhi Yojana for savings for girl child’s education, strengthening Village Level Child Protection Committees to prevent child trafficking and child marriage and strengthening of labour laws to keep a check on child labour especially in the times of distress.

Some other recommendations were enabling vocational training to address the educational needs of adolescent girls during the lockdown, initiating community based systems to decrease the digital divide, thereby ensuring inclusive education for all and enabling civil society collaborations that can work to ensure the basic needs and human rights of adolescent girls.