Impact of Global Temperature Rise is Closer Than Ever

World hunger, rise in water levels, and global heatwaves projected to rise in the next few decades.

The human impact of climate change and global temperature rise is now closer than ever, and dire 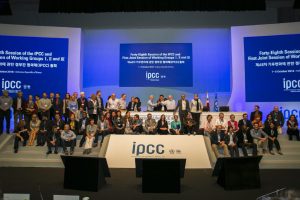 While previous climate models suggested that it would take another century of carbon pollution to create heatwaves that exceed human tolerance, the IPCC draft reveals that they are much closer to the horizon. A part of the United Nations’ designated body for assessing climate change impact, the draft report is part of their Sixth Assessment Report on Climate Change.

It states that over 14% of the world population will be exposed to severe heatwaves once every five years if the world warms by 1.5 degree Celsius, which is about 0.4 degrees above the current global temperature. This will impact the megacities of the world the most, including Mumbai, Karachi, Kinshasa, Manila, Lagos, and Manaus.

The draft warned that there is an already visible increase in extinction of species, disease spread, heat levels, ecosystem collapse, and sea levels in the current period. “The choices society makes now will determine whether our species thrives or simply survives as the 21st century unfolds. The worst is yet to come, affecting our children’s and grandchildren’s lives much more than our own,” the draft report, accessed by international media house AFP, reads.

Also Read : How Indian Islands Are Crumbling Under Climate Change

The draft report will officially be released by the IPCC in July/August, while the full 4,000 page ‘Sixth Assessment’ report will only be made public in February 2022.

It also reveals the lackadaisical attitudes of governments who had assured to work together towards net zero carbon emissions. The Paris Agreement of 2015 had 200 countries come together and vow to cap global temperature rise at two degrees. However, with the current trends, we are heading towards three degrees, at best.

The report states that any temperature rise beyond 1.5 degree Celsius can lead to “progressively serious, centuries’ long and, in some cases, irreversible consequences,” and will lead to an irreprehensible change for organisms’ ability to adapt. It calls for urgent action to respond to future climate risks.

Some projections of the report, if the temperature rises by 1.5 to 2 degrees, include:

Roughly 350 million more residents of urban regions will be exposed to water scarcity from droughts.

There could be an increase in melting of ice sheets atop Greenland and the West Antarctic, which has enough frozen water to life oceans by 13 meters.

The Amazon basin could morph from tropical rainforest to a savannah

The regions of Brazil, Southeast Asia, Mediterranean, central China could be rendered with increased droughts, heatwaves, cyclones, wildfires, and flooding.

There could be a loss of habitat and over exploitation of natural resources, including water extraction. An increase in pollution, pests, and disease, is also possible.

The report also expressed concern over rise in hunger levels. It stated that droughts and diseases could affect tens of millions within the next decades, especially due to crop failures, falling nutritional value of basic crops, and inflation in economies. “Up to 80 million more people, compared to today, will be at risk of hunger by 2050,” the report stated. The world has already witnessed a decline in global maize production (four percent since 1981), and a 15-20% reduction of millet and sorghum yields in West Africa. The protein levels in rice, wheat, barley, and potatoes have been affected, which point to decrease in nutritional value of essential crops. This could lead to protein deficiency in 150 million more citizens, the report states.

Apart from reducing yields, climate change has also led to a rise in stunting of biofuel crops and CO2 absorbing forests. This may rise by a third by 2050, affecting 183 million people in low-income households with chronic hunger.

The report also highlighted the current water crisis and stated that millions may lose access to safe water as a result of climate change. “Research looking at water supply, agriculture and rising sea levels shows that between 30 million and 140 million people will likely be internally displaced in Africa, Southeast Asia and Latin America by 2050,” the report said. It further stated that groundwater supply could be affected greatly, which is the main source of potable water for 2.5 billion people.

IPCC is the UN body for assessing the science related to climate change. It was set up in 1988 to provide policymakers with regular assessments of the scientific basis of climate change, its impacts and future risks, and options for adaptation and mitigation. Officials at the organization declined to comment on the report citing its due official release in August.

Analysing the Status of Human Trafficking in Andhra Pradesh