The NITI Aayog SDG India Index presents a grim picture of the implementation of the gender equality SDG.

The NITI Aayog’s recently released SDG India Index has highlighted India’s poor performance in the realm of gender equality. Even with an upgrade in the all-over implementation of the Sustainable Development Goals, the country did not show much progress in the gender equality and zero hunger goals of the SDGs (Goal 5 and 2). India stepped into the ‘front runner’ category with an all-around score of 66 (out of 100), but its performance in the goals mentioned above continues to be in the ‘Aspirant’ category, the lowest tier. 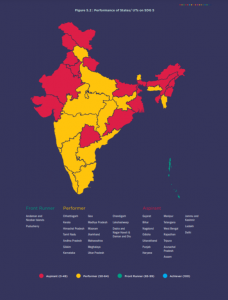 As per the report, India falls short of achieving even half the targets entailed in the gender equality goal by the United Nations. The NITI Aayog scorecard has granted 48 points to India on the said index. The Sustainable Development Goals were adopted by the UN in 2015 as a universal call to action to end poverty, protect the planet, and ensure a development that is just and equal. NITI Aayog is the nodal agency in the country with regards to its implementation. The third report of SDG implementation in India was released by the think tank on June 3 and details the working of 17 SDGs.

As per the UN, ending all discrimination against women and girls is a basic human right, and hence a prerequisite for sustainable development. Goal 5 calls for ending all forms of violence, trafficking, and sexual exploitation of women and girls. It further appeals to recognize unpaid care and domestic work, ensuring full participation and equal opportunities for leadership at all levels of decision-making in political, economic, and public life for women.

Targets under the goal include:

-Ending all forms of discrimination against women

-Enhancing the use of enabling technology to promote women empowerment

The report has divided performance ranks into four categories, which include ‘Achiever’, ‘Front Runner’, ‘Performer’, and ‘Aspirant’. While no state managed to fall under the category of ‘Front Runner’, only two union territories- Puducherry and Andaman & Nicobar Islands-managed to do so. Fourteen states, including Gujarat, Bihar, Nagaland, Odisha, Uttarakhand, Punjab, Haryana, Manipur, Telangana, West Bengal, Rajasthan, Tripura, Arunachal Pradesh, and Assam, fell under the lowest ‘Aspirant’ category. This also included the UTs of Jammu & Kashmir, Ladakh, and Delhi. 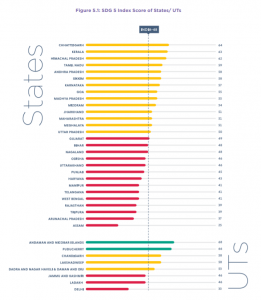 The SDG criteria are as follows:

The report concluded that the Sex Ratio at Birth in India is 899 females per 1,000 males. The target allocated in this goal is to achieve births of 950 females for 1,000 males. The states of Chhatisgarh and Kerala surpassed the said targets with sex ratio at birth of 958 and 957 respectively. The poorest performers were Uttarakhand (840), Delhi (844), and Haryana (843).

India also reported 20 cases of cruelty/violence by husband, relatives for every 1,00,000 female population. Assam and Delhi lodged the highest number, 71 and 41 respectively.

Percentage of Women in Legislative Assemblies

India also performed poorly against this indicator by only having 8% women in state legislative assemblies against a desired 50%. Chhatisgarh, West Bengal, Puducherry, and Jharkhand had the highest representation of women legislators (12-14%), while Mizoram and Nagaland reported zero.

Operational Land Holding
The NITI Aayog acquired data from the Agricultural Census of 2015-16, which stated that the percentage share of female operational landholders is 13.96%. This number was the highest in Meghalaya (34.32%) and the lowest in Punjab (1.55%). However, a large majority of the states were far away from the desired target of 50%.

The ratio of female to male LFPR stands at 0.33 (as per a 2018-19 survey). The lowest share of landholders was recorded in Bihar. Meghalaya and Chhatisgarh were the only states to come close to the target. The all-around number for India was 0.33, which means that for 10 males, only 3.33 women participate in the labour force.

The poor performance by a large majority of states and UTs put the collective score of India at 48. The front runners (Puducherry and Andaman & Nicobar) received a score of 66 and 68. The state of Assam and the UT of Delhi received the lowest scores on the index, 25 and 33 respectively. India was farthest in its targets of women representation in state legislatures, and crimes against women by unknown persons.

“India was able to manage an increase in its SDG implementation score due to robust policy implementation of Goals 6,7,11, and 12 (clean water, clean energy, sustainable cities, and sustainable production). Its success in the Swach Bharat Mission, Ujjawla Yojana, Amrut Abhiyan, and Swasthya Mission helped bring remarkable improvement. The issue, however, is the implementation of goals of zero hunger and gender equality. The country needs to work a lot, especially on decreasing anaemia and stunting in women and children, which is increasing greatly. The participation of women in economy, politics, and decision-making still require a lot of work,” said Sankyukta Sammadar, SDG Advisor to NITI Aayog.

Another senior official who worked on the SDG India Index at NITI Aayog, while expressing similar concerns, said that there is a glimmer of hope in the shift of numbers from last year. Implementation of a few criteria has led to a 6 point increase in the SDG 5 score for India. “But since we are still in the ‘Aspirant’ category, no one can refute that this needs a lot of work. We are not even halfway to achieving the goals,” they added.

The official further said that if work is done in partnership on the indicators of SDG 5 mentioned in the report, the country will progress ahead.

However, some experts pointed at the use of dated datasets by the NITI Aayog in formulating the report. It is pertinent to note that the NITI Aayog has used data sets from 2015-16 for two indicators, datasets from 2016-18 for one indicator, and three data sets each for years 2018-19 and 2019-20. As per economist Mitali Nikore, this fails to present an honest picture of our achievements. “The use of dated datasets also does not allow one to gauge the impact of policies like Beti Bachao Beti Padhao on the SDGs, and newer data collection methods could prove to be useful to bring out real figures,” she said.

“This may have happened due to an absence of robust and updated datasets. We are also limited by data that already exists, and hence we are forced to not take some indicators in our analysis. A lot of times, data that is available nationally is not available on a state-to-state basis, and so we are hindered to use it,” the NITI Aayog official added.

Experts that we spoke to suggested enhancing policy mechanism to ensure the full implementation of SDGs.

“We have to look at gender as a long term investment. It isn’t merely a human rights issue, but an economic issue too. If women believe that they have the backup of state machinery, they are more likely to report instances of crime and return to society as strong individuals. They also give back to the economy, and hence contribute to the national income,” Nikore said, adding that every expenditure on women’s health and rights actually improves the country’s performance as a whole.

The NITI Aayog official further expressed hope in the Index to show the sectors in which the country needs to work harder. “While NITI Aayog does not delve into the ‘why’ aspect of things, we hope that our SDG indicators can show a way forward for robust implementation of the SDGs,” they added.