Lewis, who dedicated his life to protect human and civil rights of African Americans, hada significant role in building America a nation based on the notion of liberty, equality and justice.

One of the towering figures of the civil rights movement in USA, John Robert Lewis, a congressman, died on 17 July 2020 at the age of 80 after a 60-month long battle with pancreatic cancer. 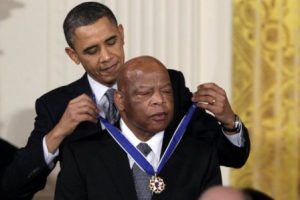 Lewis himself announced the disease in late December 2019 and vowed to fight it while stating: “I have been in some kind of fight – for freedom, equality, basic human rights – for nearly my entire life. I have never faced a fight quite like the one I have now.” Lewis’ funeral took place in Atlanta, Georgia, on Thursday, 30 July 2020 after completing a week of memorial services for the civil rights icon, including a memorial service in Troy, Alabama on 25 July 2020 and a final journey across the Edmund Pettus Bridge in Selma on 26 July 2020. It was the same bridge where Lewis was beaten up by Alabama state police during the march to Montgomery on 7 March 1965, which was later known as “Bloody Sunday.”

Lewis was one of the ‘Big Six’ leaders of the civil rights movement in the 1960s, who continued to fight for civil and human rights even after joining Congress in 1987. Born on 21 February 1940, Lewis grew up in an era of racial segregation. Inspired by Martin Luther King Jr., he joined the civil rights movement and participated in the Freedom Rides of 1961. Freedom Riders were non-violent protesters who challenged the segregated facilities at interstate bus terminals in the South, which had been declared illegal by the Supreme Court. In 1963, Lewis became the youngest speaker at the March on Washington where he declared – “We all recognize the fact that if any radical social, political and economic changes are to take place in our society, the people, the masses, must bring them about.” Although, the Civil Rights Act came in 1964, it was not easy for African Americans to get voting rights in the South. In order to bring attention to their struggle, Lewis along with Hosea Williams organized a march from Selma to Montgomery, Alabama on 7 March 1965.

“…I urge you to answer the highest calling of your heart and stand up for what you truly believe. In my life I have done all I can to demonstrate that the way of peace, the way of love and nonviolence is the more excellent way. Now it is your turn to let freedom ring.” – John Lewis

It was after crossing the Edmund Pettus Bridge that the marchers were beaten by state police, including Lewis, who suffered a fractured skull in this attack. This day was labeled as “Bloody Sunday” and it contributed in passing of the Voting Rights Act in 1965. Former President Barak Obama, during his tribute to Lewis at his funeral, stated that “the world saw what happened, bore witness to Black Americans, who were asking for nothing more than to be treated like other Americans, who were not asking for special treatment, just equal treatment, promised to them a century before, and almost another century before that”. In this fight for equal rights, Lewis had a significant contribution. He was elected to Congress in 1986 and since then he has been serving at the House of Representatives until his death.

After being elected as a member of House of Representatives, Lewis continued his fight against racial segregation in any form. In 2011, he received the Presidential Medal of Freedom, which is the highest civilian honor in USA for his approximately 50-year long fight for obtaining equal rights for the Blacks. Hence, receiving this highest civilian honor in the hands of Barak Obama, America’s first Black president, became a matter of proud for Lewis as during his fight, he never dreamed of such possibility that one day an African American would be the elected president of the United States. Lewis had good relations with almost every American President, except Donald Trump, the current president of USA. In 2017, after Donald Trump’s inauguration, Lewis commented that he did not consider him to be a “legitimate” president because of the involvement of Russians in the election process. Lewis’ sound relations with other American Presidents are reflected through the presence of three former presidents – George W. Bush, Barak Obama and Bill Clinton at Lewis’ funeral at Ebenezer Baptist Church.

George W. Bush had shared somewhat tense relationship with John Lewis after 9/11 tragedy. But they have shared good political relations too as George Bush narrated in his tribute to Lewis. He mentioned working with Lewis to develop the National Museum of African American History and Culture to the Washington Mall. Lewis made a significant contribution in the Emmett Till Unsolved Civil Rights Crimes Act, which was signed by George Bush to seek justice in the cases where it had been long denied. George Bush also remembered his visit to Selma, Alabama with Lewis to celebrate the 50th anniversary of his march across the Edmund Pettis Bridge. It was during this celebration that Barak Obama acknowledged John Lewis as one of his heroes, and termed him the “finest disciple” of Martin Luther King Jr. during his tribute to Lewis at his funeral. Obama considers Lewis a ‘founding father’ of better America, while delivering his eulogy to Lewis at his funeral. Obama in his powerful eulogy to Lewis said – 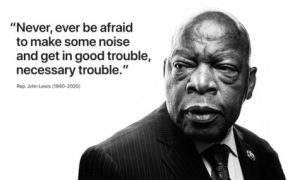 “On the battlefield of justice, Americans like John, Americans like Lowery and C. T. Vivian, two other patriots we lost this year, liberated all of us… America was built by people like them. America was built by John Lewises. He, as much as anyone in our history, brought this country a little bit closer to our highest ideals. And someday when we do finish that long journey towards freedom, when we do form a more perfect union, whether it’s years from now or decades, or even if it takes another two centuries, John Lewis will be a founding father of that fuller, fairer, better America.” – Barak Obama

Obama turned his eulogy into a ‘political tribute’ to Lewis when he talked about need to save democracy in USA. He stated – “…the faith of this democracy depends on how we use it. That democracy isn’t automatic. It has to be nurtured. It has to be tended to. We have to work at it… He [Lewis] said that as long as he had a breath in his body, he would do everything he could to preserve this democracy, and as long as we have breath in our bodies, we had to continue his cause…Like John, we’ve got to fight even harder for the most powerful tool that we have, which is the right to vote.” Obama’s this statement came at the time when President Trump suggested to delay the November Election, however President Trump has no authority to do so. Obama went on suggesting to revive the Voting Rights Act as per Lewis’ wish and name it the John Lewis Voting Right Act, which he considers will be the final tribute to Lewis.

Also Read : Violent Conflict in the Countryside: Case of the Philippines

It seems that Lewis was much affected by the recent incident of George Floyd’s racial murder and the later state-sponsored violence on peaceful demonstrations, that he wrote his final message to the citizens of America which was published posthumously. The letter contains a hope for better future, as Lewis felt inspired by the youth of all races who stood up for the equality after the murder of George Floyd on 25 May 2020 by Minneapolis police. Lewis writes – “While my time here has now come to an end, I want you to know that in the last days and hours of my life you inspired me. You filled me with hope about the next chapter of the great American story when you used your power to make a difference in our society.” The incident of George Floyd, violence on demonstrations, and President Trump’s suggestion to delay the Elections due to this pandemic crisis have resulted into a threat to democracy in USA, which is a result of a long struggle by African Americans to get equal voting rights.

Lewis also felt this threat to democracy, and in his last message to American citizens demonstrated the importance of vote in democracy by stating – “Voting and participating in the democratic process are key.

The vote is the most powerful nonviolent change agent you have in a democratic society. You must use it because it is not guaranteed. You can lose it.”

At the end, Lewis again showed his faith in new generation and asked to follow the path of love and nonviolence to win over hate and violence. He wrote – “When historians pick up their pens to write the story of the 21st century, let them say that is was your generation who laid down the heavy burdens of hate at last and that peace finally triumphed over violence, aggression and war. So I say to you, walk with the wind, brothers and sisters, and let the spirit of peace and the power of everlasting love be your guide.” With these words, Lewis said goodbye to this world leaving the mark of his struggle for equal rights on the hearts of African Americans.

Lewis, who dedicated his life to protect human and civil rights of African Americans, had a significant role in building America a nation based on the notion of liberty, equality and justice. However, this notion has not been achieved completely. Even today there are incidents of racial violence in USA, but it does not affect Lewis’ role in developing whatever racial equality USA has in postcolonial era. His dedication to nonviolence, moral principles and ethics have won him the admiration of many politicians including former presidents of USA. Lewis has left a huge responsibility on the shoulders of young generation to develop a society full of love and peace among races and called for a continuous struggle to gain freedom in true sense. At the end, it can be said that Lewis was a personality, which will be remembered for centuries ahead as a founding father of a better America, as a civil rights activists who struggled to give a new meaning to voting rights as well as freedom for African Americans, and now it is up to the coming generations to preserve this sense of freedom and equality.