Over-Prescription of Antibiotics: A Profitable Business in India

Luring and giving gifts or complements to doctors by drug companies in India is a rampant practice. In return, doctors including untrained quacks prescribe excess amounts of antibiotics with an irrational mix of ayurvedic medicines.

As per a recent undercover report by the Bureau of Investigative Journalism, India’s two biggest drug companies—Sun Pharma and Abbott have allegedly been luring small doctors, also known as quacks, into prescribing antibiotics in excess amounts to people.

This has resulted in a problem of increasing drug-resistant superbugs all over the world.

According to the report by the media organization, these drug companies have often been selling antibiotics to untrained healthcare practitioners. These so-called doctors prescribe the drugs without knowing its repercussions, thereby resulting in an increasing number of deaths among infants.

India alone reports to around 58,000 deaths every year due to excessive intake of antibiotics.

An undercover reporter of the media organization caught a Sun Pharma salesman admitting to the dangerous practice, whereby doctors are given gifts in the form of extra cash, medical equipment, travel cards, fridge, TV, etc.

Similarly, an Abbott salesman also revealed to the media house that quacks could easily be lured with cash as minimal as INR 2,000 to over-prescribe these dangerous antibiotics.

There are many communities especially in rural parts of India that rely completely on quacks for medical supervision. The country is still struggling to keep up with maintaining proper health standards for each and every individual, irrespective of the place he/she comes from.

‘Most countries have a health system which is regulated and many have entirely public systems with accountability, which India is still to catch up’, added Dr Gupta.

Lack of proper education is another factor due to which many aspiring doctors don’t get proper training.

‘Making of a doctor is questionable in India. In several colleges, quality of education is suffering too. People aspire to get into medical colleges by paying a huge sum of money to get degrees, but to be a good doctor is a rare aspiration. They lack confidence but still go ahead with the prescription without being sure about the antibiotic.Proper education including refresher courses is required to build confidence’, Dr Gupta further said. 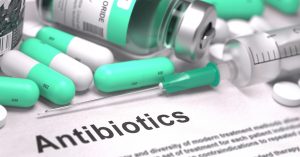 Although free medical services are provided to poor patients across the country but statistics by Center for Disease Dynamics, Economics & Policy (CDDEP) say that India is still short of 6,00,000 government doctors and two million nurses. As a result, many people have no other choice but to depend on over 2.5 million quacks practising in various parts of the country. Unfortunately, as per experts and even well-trained doctors are also part of the drug market.

‘Untrained or trained, both types of doctors, prescribe these antibiotics for nothing. Lack of facilities is one of the deficits for not being able to diagnose. But sometimes even after investigations for prevention during surgery, the antibiotics are being prescribed. It’s not an acceptable practice but a change can come only at a preparation level’, said Dr Gupta.

Low income also adds to the malpractice as underpaid doctors often fall prey to the hands of these salesmen who lure them with money, which is often enough to run a house.

Despite strict rules and regulations, companies like Sun Pharma and Abbott continue to sell a large number of antibiotics involving direct cash as low as INR 2,000 and indirect as high as INR 20,000. Offers on medicines like free boxes and free samples are also a few of the tactics often used by salesmen. Even bonuses are included for a sale of antibiotics worth over INR 3,00,000.

However, spokespersons of both Sun Pharma as well as Abbott remained in denial over the shocking revelations by their salesmen.

Antimicrobial resistance (AMR) is one of the greatest health threats in the world and antibiotics are the main cause behind it. Over-prescription not only makes the bacteria drug-resistant but also speeds up the process of it becoming a superbug.

The report by The Bureau of Investigative Journalism has shocked experts across the globe and many have strongly condemned the act. Most agree to the fact that regulation in norms limiting prescriptions of antibiotics and stricter rules is the only way to bring an end to this dangerous practice, which is taking so many lives every year.

A big challenge lies in front of the developing health sector of India where many die due to improper or incomplete treatment and even wrong diagnosis. I have personally been a victim to the wrong diagnosis once where unnecessary heavy antibiotics severely affected my joints. However, things came under control before it was too late. But many in the country have lost their near and dear ones due to unethical medical practices which greedy doctors often resort to.

Apart from the illegal sale of heavy antibiotics, we often come across reports of wrong surgeries, illegal organ trade, exorbitant hospital fee, etc. It’s high time that the Government of India takes strict measures to put a stop to all this before the medical profession completely loses its respect and becomes just another money-making business.

The writer is a freelance journalist based in Delhi. She can be reached on twitter
@tanvijain260591

Article 370 has its pros and cons just like other laws