The magnitude of the road accidents burden in India calls for a robust injury surveillance system to be highlighted during the Road Safety Week.

In a country possessing world`s most dangerous roads, it is disheartening to see survivors often left to fend for themselves. As the National Crime Records Bureau and Ministry of Road Transport & Highway rightly record, over 1,37,000 people were killed in road accidents in 2013 alone, which is more than the number of people killed in all our wars put together. Sixteen children die on Indian roads daily. Delhi itself has a count of more than 5 lives ending on its roads every day.

The Fifth UN Global Road Safety Week during 6-12 May takes into account that strong leadership is needed to advance road safety in countries and communities and achieve related Sustainable Development Goals and other global targets. It is imperative that the data reported is realistic to understand the exact nature of the current scenario. On the occasion of the Road Safety Week, the George Institute for Global Health has called for a multi-sectorial approach that uses the existing health and police data and links it with the insurance data, including PM-JAY to get the correct representation of the nature and magnitude of injuries for preventing them in India.

The Government of India recognizes that one of the major gaps in planning and implementing injury related prevention strategies is the lack of realistic data on the exact nature and spectrum of injuries reported in our hospitals.

The challenges that prima facie exist for establishing such a system is sustainability, data quality, and utility of data for action. Using the WHO injury surveillance system, an evaluation of existing injury data collection/surveillance system was undertaken in India by the George Institute for Global Health.

“All existing data sources have their limitations as to “who” the system captures. For example, police data only reports registered medico legal or direct case reports which are not representative of all injuries in the populations. Similarly, health data is also limited in its representativeness of injuries in the community. There is a need to address these gaps through a multi-sectoral approach and with an appropriate web based data collection tool, which will of course contribute significantly to a comprehensive injury surveillance system in India,” says Dr Jagnoor Jagnoor, Senior Research Fellow at the George Institute for Global Health.

India has one of the highest road traffic mortality rates at 17.6/100000 population. It also has a decentralised governance system, making implementation of the approach of ‘health in all policies’ challenging. However, using MISA to develop issue-centred and focused strategies has been successful (e.g. in HIV, tobacco control). As the estimated cost for road injuries is 3 per cent of the gross domestic product (GDP) and the total health budget of India is 1.2 per cent of GDP, there are resource constraints in reducing the burden of road injuries in India. There is high out of pocket expense, with road injuries contributing to over 30 per ecnt of catastrophic health expenditure. This will clearly have a significant contribution to the cost of Universal Health Coverage, and this makes a strong case for prevention of road injuries. Dr Jagnoor emphasizes that “Health foots the bill for road injuries, prevention of road injuries largely depends on sectors other than health.” Prevention needs Safe System Approach where action of sectors other than health is pivotal. 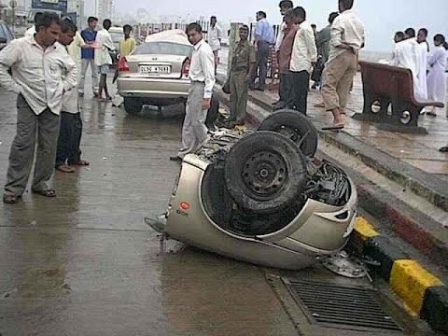 There is alsoa need to build systems that enable future data linkages, for example, with Aadhar card and National Identification Number for health facilities. As suggested by the George Institute for Global Health, effective partnerships with a larger range of relevant stakeholders, including the academic community, should be established to increase the relevance and usefulness of thedata. The Sustainable Development Goal 3.6, reducing road traffic injury related mortality by 50 per cent by 2020, cannot be achieved in the absence of robust data on burden and risk factors ata national level.

The George Institute for Global Health has found that the major challenges to development of acomprehensive system were partial population coverage, level of completeness, lack of standardisation in data collection, bias in data sources (such as only police based data orhospital based data) and poor reporting systems.Validity of morbidity data is a major challenge, and the one that needs to be urgently addressed with an aim of improving trauma services in the country. Hence, the George Institute for Global Health collected data from January to March 2017 in a total of 11 sites including Himachal Pradesh, Haryana, Punjab, Gujarat and Maharashtra. Interviews were conducted with the staff, collecting information of patient history, staff for ambulance and call centre under the National Highway Accident Relief Service Scheme, etc.

A comprehensive electronic data was developed and field-tested from the community to district level healthcare facilities. An important success indicator for injury surveillance system would be to integrate it with the existing health information systems. For example, having an integrated well developed surveillance system for all conditions of national priority (e.g. on injury, polio, NCDs) which enables surveillance systems to be resource efficient.

The George Institute for Global Health’s recommendations based on a review of the existing injury surveillance systems in India include strengthening lay reporting of the cause of death with Integrated Disease Surveillance project to include key injury causes, standardization of reporting to Central Bureau of Health Intelligence, and including injuries in special population level surveys. Lay reporting is the information provided (by a lay reporter) to monitor the health situation in the community and to plan and manage the health activities. The research findings also recommend facilitation of data linkages between data collectionswith information on injury risk factors such as police data, transport research wing data and those with information on injury outcomes.

It is hoped that all the initiatives and announcements made during the Road Safety Week translate into sustained awareness and innovations in ensuring a fewer number of accidents throughout 2019 extending to 2020. Thus India can achieve at least a near position to the SDG targets by 2020.

The write is a law student at Symbiosis Law School, Pune.