Unlock India: A Dollar a Day and an Android

In light of the ground-level evidence, it becomes extremely important to think of precise policy improvements to tide over the crisis. 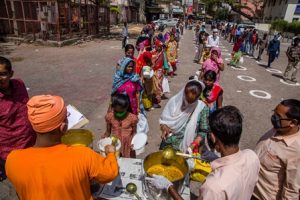 Symmetric to the global trends, COVID-19 has had multidimensional impacts on the economy and society of Indian cities. In the absence of any vaccine, prevention through containment and social distancing coupled with frequent handwashing appear to be the only viable strategies to fight against the novel coronavirus. On 24 March 2020 the Prime Minister of India had announced the nation-wide lockdown to slow down the spread of COVID-19 and to reduce pressures on the inept health infrastructure of the country. In the days and months that followed, policymakers and administration faced enormous challenges in the trade-off between ensuring health and livelihood of the people. Amid rising concerns of lives and livelihood of the poorer sections of the population becoming jeopardised, the government announced seemingly bold economic packages. However, with a few exceptions, lack of coordination in the official spheres at the ground level has had appalling consequences,especially the millions of ‘CityMakers’ who represent a significant share of the workforce and contribute in multiple ways to the economy.

With the objective to understand the ground-realities of how the COVID-19 induced lockdown impacted the lives of the CityMakers, the Impact and Policy Research Institute (IMPRI) conducted a ten-day countrywide telephonic-survey between 7 and 7 May 2020. The purpose was to evidence the challenges faced by the poorest sections of society including migrants in India, who have lost their daily wages and now are dependent on the government or non-government support for meeting their daily needs. This study adds to the existing media literature by systematically evidencing through data from 3121 CityMakers from over 50 cities of India.

The survey revealed that almost three-fourth of the respondents were engaged in informal employment, i.e., daily wage work, petty trades/business and temporary workers without any social security benefits. These respondents were vulnerable to economic and health shocks due to their irregular income, unstable jobs and lack of access to any social safety nets amid lockdown policies. It was found that 6 out of 10 workers had lost their job during the lockdown, with unemployment being highest among the casual labourers and self-employed respondents. While 74 per cent of the casual labourers lost their jobs, 67 per cent of the self-employed workers could not pursue their economic activities due to lockdown.

When asked about their reasons for unemployment, quite a significant proportion of surveyed respondents cited their inability to visit workplaces and closure of places of works as pressing reasons.

Work from home (WFH )was coined and advertised as the new mantra to ensure adherence to the diktat of social distancing. However, this economic privilege was unavailable to the poorer workers, who had no other option but toremain confined within their houses without any work. They could neither realistically practice social distancing, nor could they afford it. All these led to a massive shock to the livelihoods and wage earnings of these respondents and their families. For example, the inability to earn during the lockdown translated into 54 per cent of people being unable to pay rent for their accommodations.

Hence, quite expectedly, most people wanted to return to work. When asked if the respondents and their family members would resume work after lockdown, almost three-fourth of respondents said that they would join the same work in which they were engaged prior to lockdown, or they would look for new jobs. In other words, this loss of jobs or livelihood options can be considered as a temporary phenomenon. Importantly, the resumption of normal economic activities or absorption of the city makers in newer economic activities would significantly depend on the nature and type of government policies to jumpstart cities’ economy via providing boosts to local businesses and especially small and micro-enterprises that are hard hit amid the lockdown.

Direct implications of job losses were revealed through inadequate access to public supply of water and had to rely on accessing water from private tankers, which increased expenditure of the already cash-strapped households. WHO’s recommendations of frequent hand washing with soap, thus became a practical challenge. Almost one-third of the respondents reported improper drainage facilities including absence of any garbage collection facility in their locality. Further, social distancing was not feasible for the CityMakers as they lived in congested spaces, with three to four people living in a single room within non-notified slums and unauthorised colonies. Such conditions provide ripe grounds for the possibilities of the rapid spread of COVID-19, and compromise the lives of the CityMakers, leaving them practically defenceless against the pandemic.

Loss of jobs had the spillover impacts on the education of their children, where most of the sent their children to government schools.In the prevailing new normal of online teaching methods and reliance on digital modes of learning, education has become a distant dream because theyhad no laptop or smart phone for accessing such education. With 88 per cent of the CityMakers depending on their household income or saving and/or borrowing or taking financial help from relatives, friends, etc. for meeting their health-related expenditure, this temporary job loss has added to the anxieties thatany kind of health emergency including COVID-19 would exacerbate their already weak financial position and make them more vulnerable.

A defining challenge for devising appropriate mitigating policies for the city makers is the lack of data about them both prior to, and during, any kind of emergencies. Hence, preparedness and early action by the communities are essential. People must possess government documents (ration card, Aadhaar card), bank account, enrolment in different government welfare schemes, and so on so that they can benefit from any central and state government relief measures—both cash and non-cash support during lockdown. The survey revealed that coverage of and eligibility for the government support programme was a major concern as evident from the possession status of various important documents by the respondents. About 23 per cent of the respondents did not have ration card, 32 per cent did not have zero-balance Jan Dhan bank accounts, and on an average only one out of 10 respondents were covered under the Government of India’s flagship public health as well as life insurance schemes – Ayushman Bharat, PM Jeevan Jyoti Bima and PM Suraksha BimaYojna.

Regarding their perception on eligibility of the government support programmes, only 37 per cent of the respondents thought that they were eligible for benefits under Pradhan Mantri Gareeb Kalyan Yojana (having an outlay of Rs 20 lakh crore for the COVID-19 response). However, only 34 per cent of the respondents could avail benefits like cash transfers and free ration under this scheme.

It becomes extremely important to think of precise policy improvements to tide over the crisis. To start with, the stringent Aadhaar requirements for accessing different schemes must be relaxed for at least the next six months.

Another option could be a job assurance programme would give needy households livelihood security during the health crises. Essentially, COVID-19 crisis requires extremely localised and coordinated responses. Hence, city governments and their elected representatives should have decided on vigorous delivery of basic urban services that might be the most effective in their contexts. Financially empowered city governments with clear functional domain and adequate institutional capacity can respond rapidly and contain the outbreak of COVID-19.

It is equally important to improve and expand the coverage through the Public Distribution System (PDS). Bridging the awareness gap regarding available government support programmes, especially the PDS, through timely and reliable information and expanding the coverage of such programmes to needy, but non-registered segments via certain temporary forms of authentication as alternatives can be very useful. While the latest Economic Survey (2019–20) spoke of ‘Thalinomics’, which says that a good vegetarian and non-vegetarian platter costs a minimum of Rs 25 minimum and Rs 40, respectively, therefore, in order to ensure that the poorest sections of the population are able to fulfil their dietary requirements, each identified needy person must be provided with ‘a $ a day’ (around Rs 2000 per month). Further, for everyone to be vigilant of the spread of COVID-19, digital literacy for children belonging to poor families, and smooth transfer of digital payment of welfare scheme, poor households should be provided an Android phone either for free or at a subsidised rate through PDS shops. In addition, the private sector (under the CSR component) should come forward and encourage for providing free sim and data coupon to the poor households by identifying through Below Poverty Line (BPL)/Antyodaya Anna Yojana (AAY) cards. It is the most opportune time to ensure digital literacy among the people. In order to ascertain the per person benefits from the PMGKY package, each person of the country would get Rs 15,000. However, in reality, we do not give poor people more than Rs 500 per month. Contrasted with developed countries, this meagre sum is spent only on a one-time meal.In the United States, $300 to $400 are being  given weekly to the unemployed as allowance. Therefore, to ensure dignified assistance to the poor, the Government of India can afford to give $1 (about Rs 75) a day to each poor person of India. If we give Rs 2000 assistance to 12 crore people (the bottom quartile population in the urban economic ladder), it will translate to Rs 24,000 crore a month, and 72,000 crore for three months. Moreover, if we can give an Android phone in a graded manner to around 5 crore people (prioritising elderly, women and children going to government schools) in the cities, it would amount to around Rs 30,000 crore (cost per handset around Rs 6000). Overall, this would amount to Rs 100,000 crore and would be crucial as India moves to the ‘Unlock’ phase. Such provisioning is certainly doable and would just need a reorientation of the Union Budget 2020-21 and to this the Rs 35 lakh crore worth of forex reserves could be rightly utilised to pay for the war against COVID-19, as it would help distribute the pain similar to the Keynesian tenets during the World War II and create a better society.

Prisoners and the Right to Vote: Questions on Disenfranchisement