COVID-19 has been declared a national disaster. The Disaster Management Act, 2005 underlines the principle of non-discrimination in the provision of relief to victims affected by a disaster.

Durbar Mahila Samanway Committee (DMSC), the country’s oldest collective of sex workers, has approached the Supreme Court for support on account of the COVID-19 pandemic, 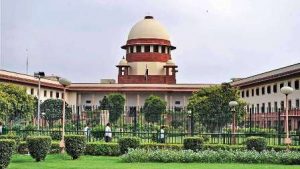 which has ravaged their lives and livelihoods and left the community impoverished.

The application has been filed in an ongoing case before the Supreme Court, where the Court had appointed a panel to look into the problems of sex workers and suggest measures for relief and rehabilitation. The panel made a number of interim recommendations to the Court over the years and had submitted a final report in 2016.

DMSC, which is a party to the proceedings and a member of the Court-appointed panel, says that the government’s failure to implement the report has worsened the condition of sex workers during COVID-19. One of the recommendations of the panel, which had received the Court’s approval in 2011, was that sex workers be issued ration cards, voter ID and bank accounts, as they face difficulties in accessing such documents. This has not been implemented till date; “in Kolkata more than 50 per cent of sex workers do not have a ration card. As a result, most have been left out of the public distribution system, which is what poor and vulnerable sections have relied on to survive, without money or jobs”, says Bharti Dey, Mentor of DMSC.

Sex workers have had no work or earnings since March 2020 when the nationwide lockdown was announced.

Women survived by scrimping through their meager savings, taking loans on exorbitant rates or through local charity, explained Kusum, President of All India Network of Sex Workers (AINSW).

Also Read : COVID-19 and Plight of the Visibly Invisible

Even after the easing of restrictions, sex workers have not been able to resume work. With the exodus of migrant workers from cities and the risk of COVID-19 looming large, sex workers are desperate for survival. Social stigma attached to sex work has frustrated attempts to secure alternative livelihoods. “In Mysore, our community members tried to sell flowers and vegetables but were recognized by locals who refused to buy anything from ‘such women’ says Lakshmi from Ashodaya Samithi.” 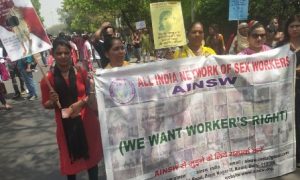 The impact on children of sex workers is dire as women have not been able to pay school fees or afford computers, laptops or smart-phones and data cards to enable children to attend online classes. Sex workers are mostly single parents and have to support their children’s’ education from their own earnings. DMSC points out that there is a grave danger that sex workers’ children will be forced to drop out of schools and join low-paying and exploitative work before they attain adulthood.

The application cites a five-state situation assessment conducted by the Taaras Coalition of Women in Sex Work among 1.2 lakh sex workers in Andhra Pradesh, Karnataka, Maharashtra, Tamil Nadu and Telangana in July 2020, which shows that only 5 per cent of sex workers had received a bank transfer of Rs 1000/- on the basis of a Labour Card for registered workers. Social barriers have prevented sex workers from seeking welfare measures for unorganised labour.

The National AIDS Control Organisation (NACO) of the Ministry of Health and Family Welfare estimates that there are over 8.68 lakh female sex workers in the country and 62,137 Hijra/transgender persons in 17 states, of which, 62 per cent are engaged in sex work.

In April 2020, the All India Network of Sex Workers had written to NACO requesting that the targeted intervention projects that conduct HIV prevention among sex workers be used to deliver ration and other essential services to the community. No such efforts were, however made. Sex workers with chronic illnesses like diabetes, hypertension, asthma and cardiovascular disease have no money to buy medication. In the five-state assessment, 26,527 members reported suffering from illnesses, of whom 97 per cent (25,699) were unable to access primary care services—both public and private.

DMSC has requested the Court to direct the authorities to provide sex workers monthly dry rations; cash transfer to the tune of Rs5000 per month; additional cash transfer to the tune of Rs 2500 for those with school-going children and COVID-19 prevention measures such as masks, soaps, medicines and sanisitisers. It has asked for coordination and monitoring mechanism comprising community based organisations (CBOs) of sex workers to ensure that the relief reaches the affected group. It has also asked that State Labour Departments and the Unorganized Workers Social Security Board register sex workers and provide the registered sex workers the social welfare measures that all unorganized workers are entitled to.